Swami Chidatmanandha ji conducted Jnana Yagnas, Meditation retreats and Management workshops at various chinmaya mission centers in USA from 13th April 2018 to 9 July 2018. People were inspired and tasted glimpses of devotion, higher love and spiritual essence. Here are the few reports from some of the centers visited by Swami Chidatmanandha ji.

Chinmaya Mission Vrindavan at cranbury, New Jersey, organised Jnana Yagna by Swami Chidatmanandha from 13 th to 15 th April 2018. The talk was on the topic Great Success ! in English. A Telugu talk on Vemana Poems was also organised on Saturday 14 th morning. All the sessions got Good response. Pujya swami Shantananda Ji, president of Chinmaya Mission West also graced the occasion and Blessed the Audience.

Chinmaya Mission Washington regional centre organised the Jnanayagna of swami Chidatmanandha from 16 to 18 April at Chinmayam in Springfield, Maryland on the topic COOL HAPPINESS, and at Chinmaya Somnath, Chantilly, Virginia, from 19 to 22 April, on the topic ENJOY THE BLISS. These talks were based on the texts 1) Jivan Mukti Viveka by swami vidyaranya and 2) Sarva Vedanta SIDDHANTA SAARA SANGRAHA by Adi Shankaracharya Ji respectively. A Telugu talk on Vemana Poems was also organised on Saturday 21 st morning. All the sessions got very Good response and the listeners enjoyed the talks. Pujya Swami Dheeranandaji presence was a Blessing to all. Acharyas Priya Ji and Rahul Ji's dynamic presence was a source of motivation to all the organisers and coordinators and sevaks.

Chinmaya Mission Avantika in Ann Arbor, Michigan, USA, Organised Jnana Yagna of Swami Chidatmananda from 2 nd to 8 th May 2018. There was very Good response for the Yagna. Morning Classes on Guided Meditation were very absorbing and peaceful. Evening classes on Enjoy The Bliss, based on SARVA VEDANTA SIDDHANTA SANGRAHA OF SRI ADI SHANKARA were very informative and inspiring. On 8 th May Paduka Puja of Sri Gurudev was also performed.Acharya Sharada Kumar Ji and sevaks organised it excellently. Swamiji also visited various Balavihars and addressed parents and children. Members from Ann Arbor Chinmaya Mission also participated in the Jnana Yagna. On Sunday the Graduation ceremony of Balavihar kids was also conducted and Swamiji gave away the Graduation certificates and other prizes to the winners.

Chinmaya Mission Alpharetta ( Chinmaya Gurukul ) organised the Jnana Yagna of Swami Chidatmanandha from 9 th to 13 th May 2018, at the Ashram premises on the topic Path of Devotional Elixir based on Bhakti Rasayanam of Madhusudana Saraswathi in the evenings and Guided Meditation in the mornings. All the sessions received Good Response. Evening talks were very uplifting and Morning Meditations were deeply Absorbing. Swamiji also addressed all the sevaks and teachers of Balavihars and parents of all students, these talks were Highly Inspiring and every one felt greatly Motivated. President Sudha Malhotra Ji and Board members and sevaks organised all the events very well.

Chinmaya Bharathi - Chinmaya Mission Ottawa, Canada, organized the Jnana Yagna on 'Enjoy The Bliss' and seminar on 'Great Success' by Swami Chidatmanandha from 24 th to 27 th May in the mission premises. All the Sessions received Good Response. People were Inspired by the Vedantic Teachings. Meditation session and Management games in the seminar made participants Actively participate and learn the message through Activities. Bina sutarwala, Anil Parekh and team organized it well.

Chinmaya Mission Flint organised the Jnana Yagna of swami Chidatmananda on the topic SPECIAL QUALITY, based on Vidura Neeti, from 15 th to 17 th June 2018. The sessions on Guided Meditation were also conducted. The evening talks got a good response. Listeners felt inspired. Very senior devotees of Parama Pujya Gurudev swami Chinmayananda Ji remembered many experiences with HIM and revelled in sharing them with all. Morning meditation sessions were uplifting and peaceful.

Chinmaya Mission Chicago at Badri Ashram in Hinsdale, organised the Jnana Yagna by swami Chidatmananda on the topic PATH OF DEVOTIONAL ELIXIR, based on Bhakti Rasayanam Of Madhusudana Saraswathi, from 22 to 24 June 2018. Audience felt the devotional inspiration during the talks and Srikrishna Bhakti was very touching. 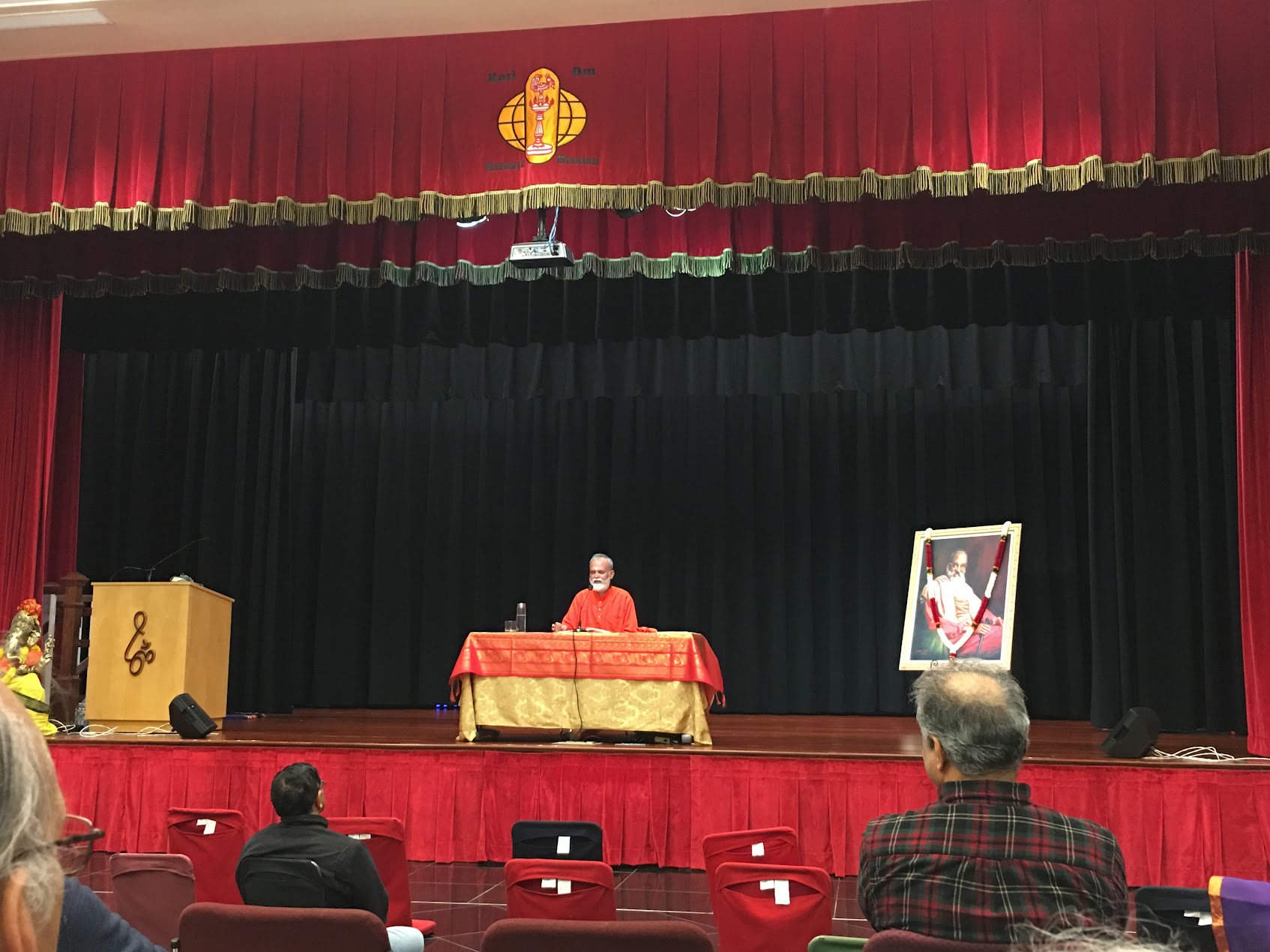