Swami Chidatmanandha ji conducted jnana yagnas from April-June 2016 in USA. Swamiji delivered the discourses in various mission centers. These continuous yagnas included the talks on various topics such as "Essential values of Mahatma Gandhi", "Effective Leadership", "Be Fearless", "Bhagawad Gita 9".
People and the mission members and devotees were highly inspired by the talks. It is significant to mention in particular the talks on Essential Values of Mahatma Gandhi. Swamiji with his exceptional ability portrayed the incidents in life of Mahatma Gandhi that infused the audience with deep reverence for Gandhi ji and the values he stood for. Many people were in tears of inspiration when they saw the Mahatma through the eyes of Swamiji. They said, they never saw Mahatma Gandhi in this way. They were grateful for Swamiji to bring in to their lives the simple yet profoundly higher values of Mahatma Gandhi.
There were also Guided Meditation sessions in few centers. People were transported in to profound peace during those sessions. 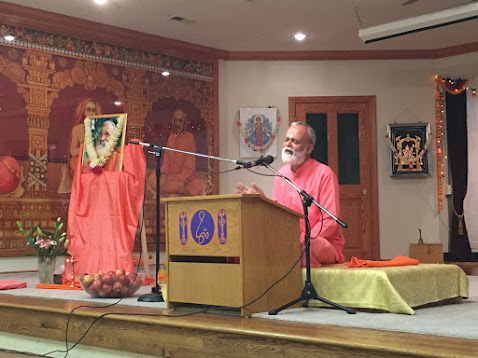